In Belize: Close encounters of the aquamarine kind

Do not adjust your set. The ridiculously fluorescent blue water you see in these pictures is correct. The water on the reef just off Ambergris Caye is that blue below the surface.

Up above is a different story. There, as you look out from shore to reef, the color can change numerous times, shimmering between emerald and azure.

The other day I joined friends for a trip around the island, with a little snorkeling at Mexico Rocks thrown in at the end.

It was my first time cruising Ambergris Caye north in a clockwise direction, starting and ending at Coco Beach Resort. Aw, it is a beautiful trip in either direction so I won’t try and split hairs over which way the ride is best.

No matter which way you go, your boat must leave the safe harbor of the reef and for 20 hair-raising minutes or so, you must cut the seam between rolling waves; angle up and over with an electric glide sort of step; and, occasionally, go all muscle on the waves — gun the engine launch up and over, into the air and down with a teeth-jarring a body-slam.

With the right driver, I could do that all day.

And with Erick and Candyman from Tuff E Nuff, we had the goods.

This was a little different sort of trip. We stopped, for example, at a resort under construction right on the edge of the Bacalar Chico Reserve. It is a rustic — though hardly primitive — spot called North Coconut Beach. The resort features small wood cabanas on stilts and a centerpiece bar and restaurant called the Una Mas Cantina. Several cabanas have been built with more on the way. The owners have 10 acres sea-to-lagoon to play with.

All is self-contained — solar power (and soon a couple of wind generators) tightly managed by a sophisticated computer system. Like I said it is still very much under construction but when it is done, this looks like it will be an ideal getaway place for people who want that desert island experience. You know, the one you see on all the tourism brochures.

Like I said, this is a work in progress. It’s website is even more “in progress.” Part of it refers to this location and part addresses some island off Dangriga. And none of the pictures are from this location. So I’m not even going to drop a link in here.

After a very nice and reasonably priced lunch at Tranquility Bay Resort (fish and chips for $18 BZD) we made a line for Mexico Rocks.

This was my first time back since the popular snorkeling site became part of the marine reserve. And it seems to have changed up a bit. For one, the feel was more like Shark Ray Alley than Hol Chan Marine Reserve — the islands two most-popular and over-exploited snorkel and dive spots.

For one, the boat next to us dropped some lobster carcasses into the water, drawing a swarm of nurse sharks, rays, turtles, myriad fish and an eight foot moray eel that it felt like it was following me around. Not complaining! It was quite a spectacle and made for some fun photos. There weren’t many coral outcroppings in the area where we tied up. It may be that the rangers are guiding the action away from some parts of Mexico Rocks, which is in need of rest and rehabilitation.

Here are some more shots from the rocks: 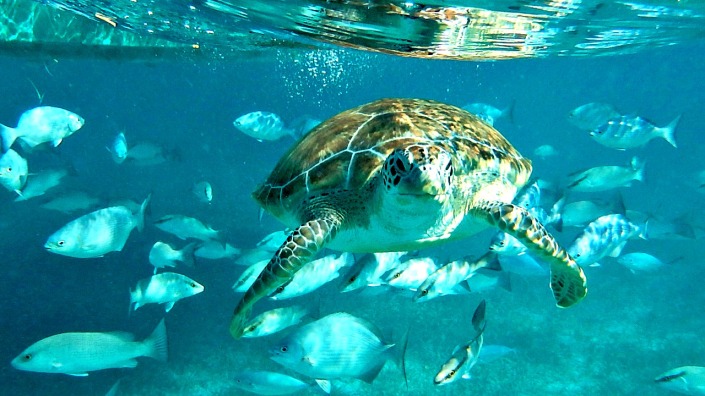 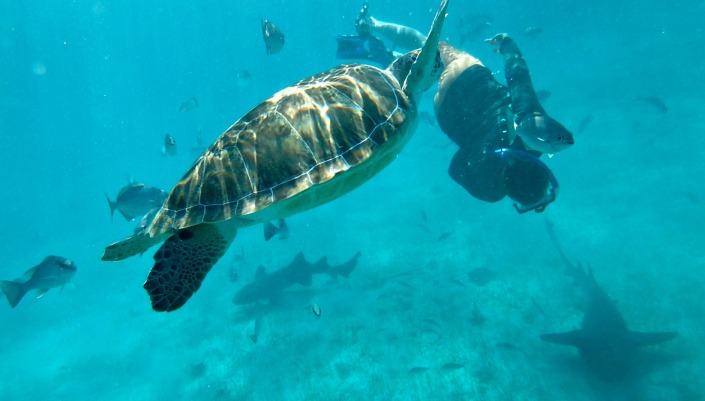 SHARKS AND RAYS AND FISH 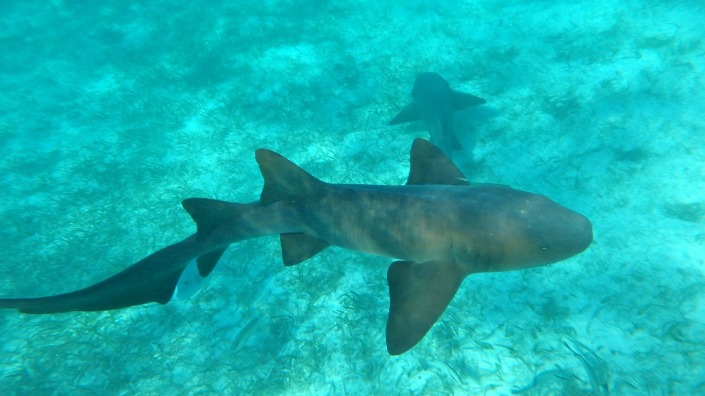 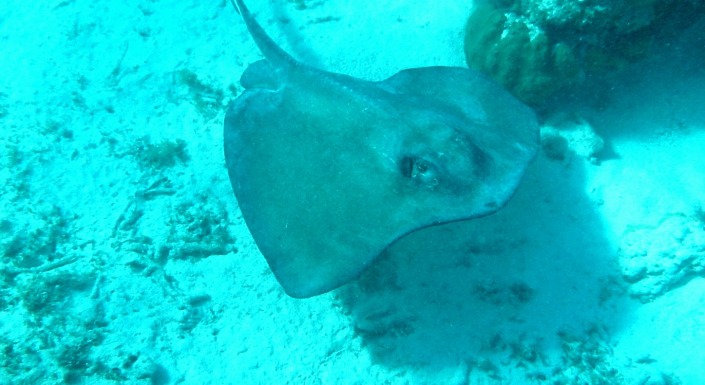 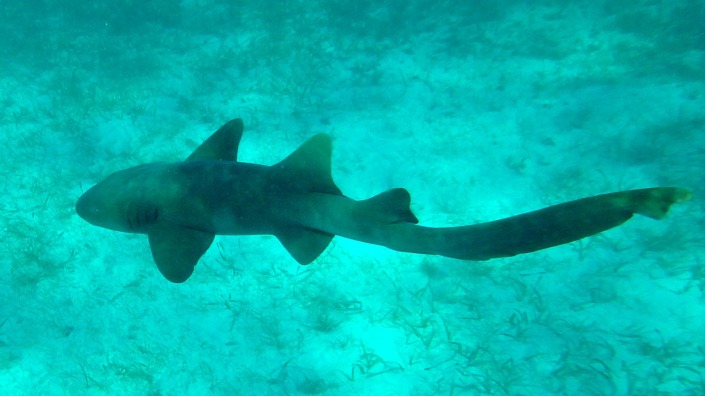 THEN THERE WAS THIS GUY 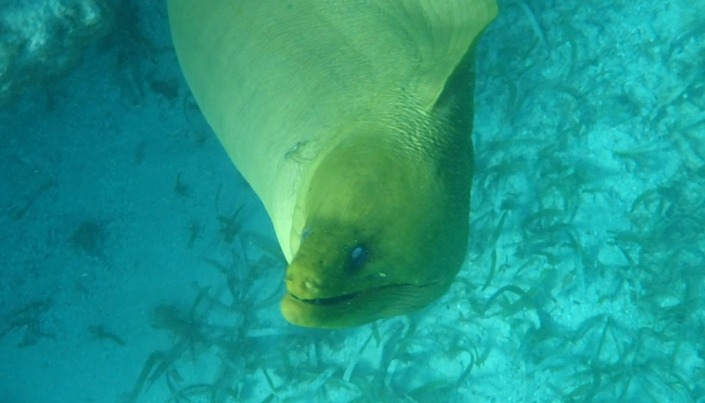 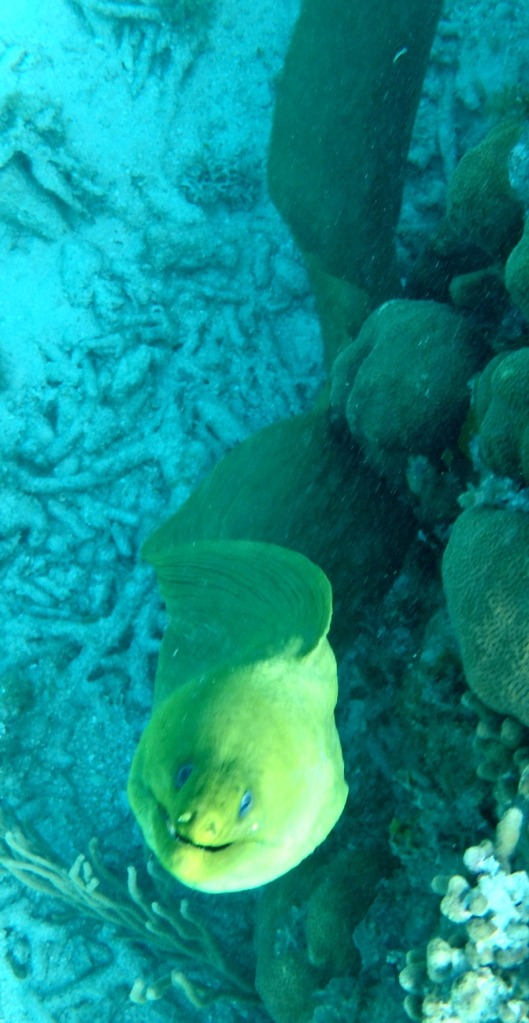 12 thoughts on “In Belize: Close encounters of the aquamarine kind”

Thanks for bringing some dazzling photos to my gloomy Toronto day! Amazing!! We absolutely loved the snorkeling in San Pedro…then we visited Montego Bay, Jamaica. Not sure who has the better marine life and gorgeous water — perhaps both! 🙂

Wonderful! Linda, I celebrate the fact that you have the experience to be able to actually compare two such beautiful places! A fellow on our little trip the other day usually scuba dives and is making it his “mission” to dive in the top 10 rated dive sites in the world. His home dives are off Vancouver and require heavy duty wetsuits but are beauty of an entirely different sorts. Thanks for sharing!

Great post! I too love the marine life at Mexico Rocks! Just curious, what type of underwater camera do you use? I haven’t done any underwater photography but would like to start. Thanks!

I use a very humble Olympus Tough — a waterproof point & shoot. It has a wide lens so cropping is essential. It actually has a couple of underwater settings but I found them absolutely terrible. It is also good only for snorkeling and shallow water — or shooting in the rain.
I recommend a waterproof camera for anyone living in Belize. Even if you don’t go near the water it will keep moisture and dust out and last a bit longer than other cameras (I hope….still testing that theory.)

Thanks Laurie. It helps when the subject matter is everywhere you look under water!

Bob, your underwater photos are glorious! You are a brave man to get that close to the eel, but the results are amazing. And the turtle photos are stunners.

Hi Emily,
Thanks! The eel apparently lunges vertically at anyone who dives down to photograph it. I didn’t realize that when I first dove down to photograph it and suddenly my frame is filled with lime green and teeth! Couldn’t catch a “jaws” shot but that critter’s teeth are impressive!
Only after I got back in the boat did Candyman mention that that particular eel has an attitude about people diving toward it!

Bob…. Glad you survived the slimy close encounter. A few of the moray head on shots are stunning. Makes me miss all that gorgeous underwater beauty and fun.

Thanks Jeff! I’ll keep the reef warmed up for you. It will be ready when you are!

great shots!!!! i was under the impression that feeding the wild life at these locations was off limits, (monitored by game wardens) since that turtle tragedy last year, when a known turtle surfaced as boats arrived knowing it was going to get fed and was run over and killed by a tour boat…. Has that all changed!!

No, I think it is still off-limits but some of these guys do what they do. The next boat over definitely tossed in a bunch of lobster parts. That’s what made me think Mexico Rocks is becoming like shark ray alley — conditioning the animals to show up when a boat pulls in. Makes for nice pictures but dangerous for turtles and other “talent.”

Life Out of the Box

Buy a product, help a person in need + see your impact.