Once more to Caye Caulker and a bunch of other stuff, like Reef Week

As small an island as Caye Caulker is, there is always something — or someone — new to be discovered.

We could have kept this up all day.

Hey, look. It isn’t every day. Not by a long shot. When they do happen, when all the island gods align themselves, well, it becomes pretty special.

Not far from where we docked, Jose was repairing the Ragga Prince. The sailboat ran up on the reef and tore a big hole in its hull. The sailboat was built in Sarteneja, a Belize town known for its fishermen, boat-building and sailors. Jose is from Sarteneja and quite proud of that reputation. A lesser boat would have been turned into driftwood on that reef.

Here are some more cute kids. These guys were touring the Reef Week information fair last week at the House of Culture on Back Street:

Of course where ever people gather in numbers on Ambergris Caye, you are bound to know some of them.

Below, my San Pedro Sun friends Dion and Chelsea pose for photos with an over-sized lobster that I call — for lack of a better name — Crusty. (I think they called him Langoustine.) Big kids and little kids enjoyed posing for pictures with the crustacean sensation. 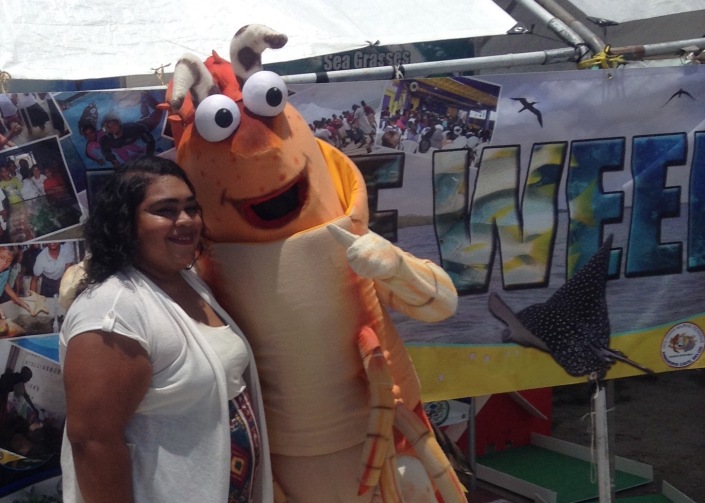 More booths and business from the Reef Week fair:

Because it was Reef Week, I went out with the crew from the Phoenix Resort to clean up the town beach again on Saturday.  And, of course, I brought our handy trash sticks — improves efficiency and saves your back! (Thank you to the wonderful people who have donated them to our group! We’re sharing the #islandlove !)  The Phoenix group does this EVERY Saturday morning, starting at 8 a.m. You can join them if you are in town. They collect beach trash from the Phoenix, south to the Blue Water Grill.

And finally, your moment of Zen, brought to you from the world famous Palapa Bar on Boca del Rio in San Pedro, Belize. The staff of this fine establishment will keep you well stocked in cold beverages as you float away your cares. Can’t you just picture yourself in one of these tubes. Can’t you?

4 thoughts on “Once more to Caye Caulker and a bunch of other stuff, like Reef Week”

Hey Bob the dream is getting closer Sharon and I closed on property last Friday. We are. Owing back over the 4th. Please let us know if you need anything and please keep posting

Congratulations, Don! Looking forward to hearing all about it when you guys return. A huge step!

Gosh Bob, I JUST sent you an e-mail! Great minds. Love your posts, see you soon.

Thanks, Susan. I’ll drop you an e-mail reply!