On Caye Caulker, “Go slow” is beginning to sound like a plea rather than a way of life

So Monday was a national holiday — Labor Day. Lots of our favorite places are closed for the day, and some, like The Truck Stop and Casa Picasso for the entire week. And there is family in town.

So, naturally that calls for a water taxi ride to Caye Caulker.

Shockingly, neither Rose nor I have been to that island since last year’s Lobster Festival. And “shockingly” doesn’t begin to sum up the changes that have taken place. The island mantra — Go slow — now feels more like an admonition.

Hotels and dining spots seem to be popping up everywhere. So do golf carts and testosterone-fueled all-terrain vehicles, more than ever.

Still, for a holiday, the island was refreshingly uncrowded.

The biggest difference from a year ago? Caye Caulker has a real beach front. The island has added tons of sand, turning once-scrubby waterfront into languorous stretches of white sand and palm trees. The vast tracts of beach tend to minimize the impact of rising new concrete bunker hotels, set back well off the shore.

There remains that fragile balance between laid-back identity and the celebrity of being the Next New Thing.

Buildings are still painted in the brilliant citrus colors of a 12-year-old princess’s bedroom. Signs are still hand-painted and quirky. Rasta lads are still hustling trinkets, conch jewelry and curios and CD’s, paintings and weavings. They still want you to pay them for taking their picture, which I now see as a badge of pride rather than a hustle. You’d grow weary too of a hundred iPhones being pointed at your face every day.

Backpackers still seem to outnumber Silicon Valley vacationers. The Split is still filled with the languid young and beautiful, lolling on the docks like white beached seals, rapidly morphing from pink to scarlet. The Lazy Lizard has endured just enough spiffing up to stay fresh while keeping its funky vibe. It remains the best place to jump into the water and let the current sweep you away when you are done basting on the dock. Still, it must be feeling the heat from the citrus wonderland that is Mara’s Sip and Dip, just down the beach. And new restaurants like Paradiso and Pizza al Taglio, pressing from within The Split compound.

Farther down the road, The Fair with its hand-held carnival eats and neighboring Margarita Mike’s are the freshest new darlings on the main road.

The farther away you walk from the Split, the less changed the island seems. Many of the same art stores and restaurants and gift shops remain south of the water taxi depot.

On the whole, the Go Slow vibe lives.

Caye Caulker, I really really like what you have done with the place.

The new beachfront on Caye Caulker: 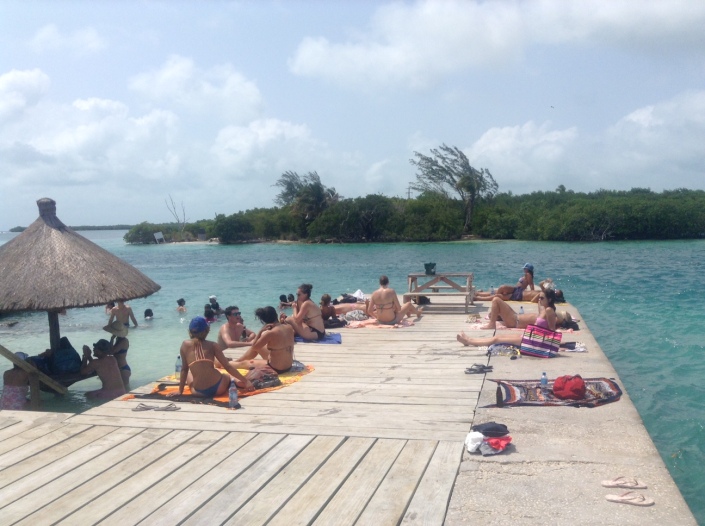 8 thoughts on “On Caye Caulker, “Go slow” is beginning to sound like a plea rather than a way of life”

I just heard we might get one of those days on Thursday! Well, rainy and grey.

Great post as usual…and great chatting with you guys on the ride back! BTW, the answer to the question is Kelly McGuire. 🙂

Right, Kelly McGuire! Thank you for remembering! Great meeting and chatting with you guys. See you around this island, or the other!

[…] out Bound for Belize Blog, Robert and Rose were there yesterday too but I never ran into […]

[…] On Caye Caulker, on Monday, it was a different sort of dance all together, albeit to the same music: a gentle moist breeze, seed pod dancers twisting and turning. The dancer mobiles were for sale at a little art shop on the main drag. […]

Just got back from Caye Caulker, we really enjoyed it a lot, went over one day to San Pedro the difference in atmosphere was night and day. Even though we did enjoy the Palapa Bar which I recognized from your blog! Planning to retire but not sure where in Belize yet, we are exploring the different regions.

Searching for the right spot is part of the fun! Happy hunting, Lawrence.