Trashing Halloween in San Pedro is a barrel of laughs

We totally trashed Halloween this year.

No, I didn’t say we got trashed. I said we trashed Halloween.

It is a big topic on the island these days because it is a big problem. As one guy would say, “Trash is huuuge!”

So, to bring awareness to the problem, our First Friday Tres Cocos Roadside Trash Pick-up group decided to bring the trash to the people.

Rose, Linda, Marie, Sue made beautiful gowns out of trash bags, Belikin beer tops, Crystal water bottles and the like. Thank you, especially, Bowen & Bowen for providing inspiration through all your disposable products which can be found on streets, lagoons, beaches and vacant lots all over Ambergris Caye. Christina dropped in as a very green Fairy Garbage Mother.

The rest of the gang — Scott & Susan, Steve, Carmen and Wayne — went as trash cans. Not any trash cans. Reproductions of the ones that the San Pedro Town Council has promised us will be distributed north of the Sir Barry Bowen Bridge.

I went as Donald Trump aka White Trash. I walked around with my thumbs out, lips puffed and kept growling “This is huuuuge!” until nobody could stand me, which was fairly early in the night. I had a blond wig, red hat with “Make America great again” emblazoned on the front (thank you, again, Mary Wells and Brad!) and a bright orange tie, which I actually found here on the island.

I tried applying orange face paint — Look, I’m a Trump-a-loompa! — but it came off a deathly beige.

Too late in the night, after some mighty large glasses,  I realized that with some large glasses on my face I could well have been Andy Warhol.

Trump and Warhol. Two maybe too obscure references for most in Belize, But a lot of people did get the Trump bit. Maybe because of the new Southwest Airlines route from Houston and resulting influx of Texans, I got a lot of “Ya’ll going to build the wall?”

We assembled at Marie’s house and worked (OK, drank) our way through Wayo’s Beach Bar, Fido’s  and Lola’s Pub before rolling down Front Street, past the UDP election rally in Central Park to the grand old Holiday Hotel which is Halloween Party Central for the island.

I’ll just say it was an insane amount of fun. Huuuuge fun.

The trash gang took a first prize for Best Group Costume, followed closely by a human set of dominoes.  Halloween — like Independence Day, Lobster Fest and Carnival — is a big, big deal here in Belize. It is huge!

I think we got home around 2 a.m. while the island was still in full-on party rocking mode.

My throat is sore and my voice is raspy.

I can barely say “Huuuuge!” 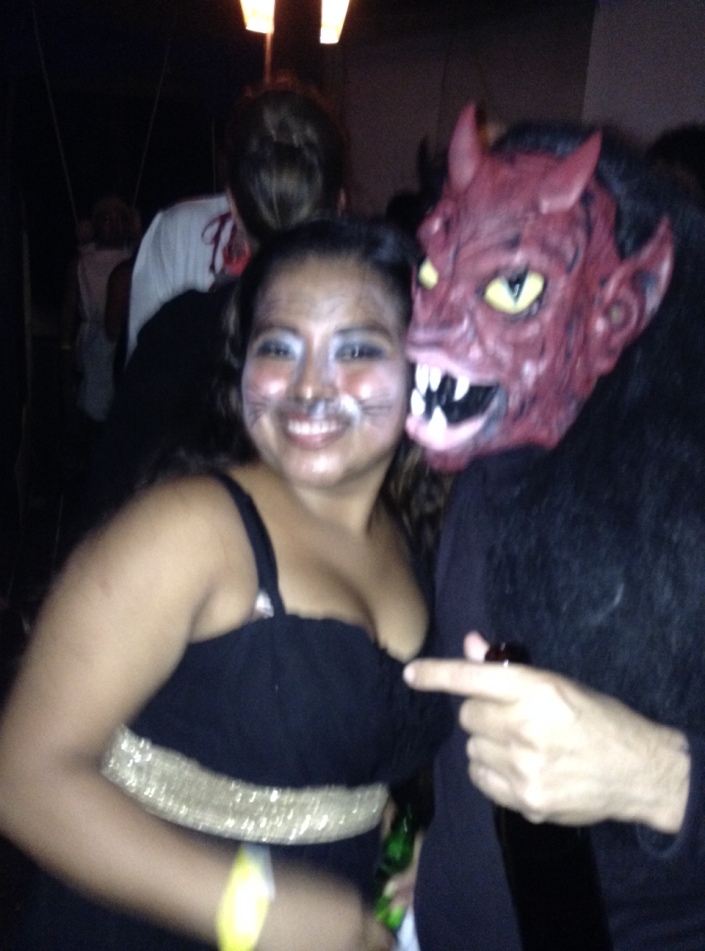 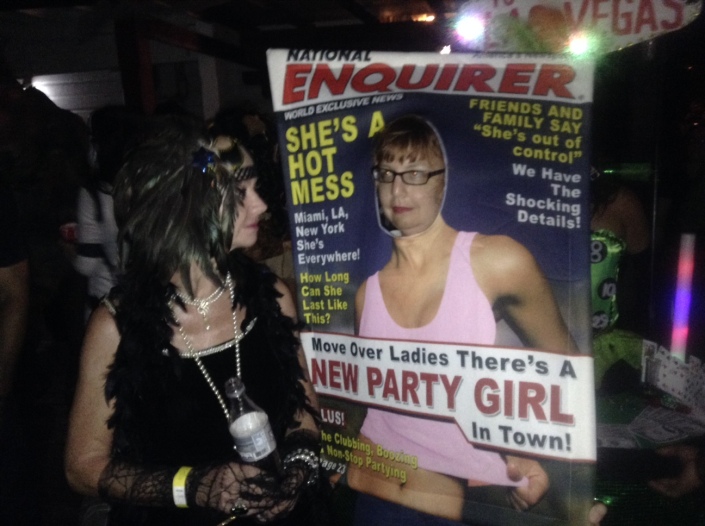 Looks like a BLAST!! Loved the group costume! Trump…well….LOL

Okay, I gotta know how the garbage can costumes were made/created using stuff available on the island! All the costumes are great, but these really required some materials, and I am flummoxed as to how you good folk managed them with the limited goods available on AC!

A very creative group, Emily. They bought up all the hoola hoops on the island. Two to each “can.” Fabrics can be found in quite a few shops these days. Add shoulder straps and stencil on the slogan: “Trash in the can …. toes in the sand.” Decorate with garbage to suit taste. Wallah!

VERY resourceful. Love the costumes and the message they send as well. Hope the island can get a handle on the garbage problem. It’s very sad to see such a beautiful place “trashed”.

I have been enjoying your blog for sometime. My wife and I dream of moving to Belize. We were on Ambergris about three months ago. We are returning for ten days in November. Five at Placencia, five back on Ambergris. I would like to meet and buy you a drink for all the helpful advice.

Hi Don,
Welcome back! Can’t wait to hear about your Mainland adventures. Shoot me a message at robertj.hawkins2012@gmail.com when Ambergris is in sight!

Have a great holiday.

I have learned my lesson on Moncho 59, Tom. It was right were we left it. Now I have to figure out a way to erase the permanent magic marker I used to draw the parking location map on my stomach ……

You mean I “might wanna” want GET a camera — I use an iPod — juss sayin!