The winds of change are in the air on Ambergris Caye

We have been enjoying some interesting days lately.

A storm passed through dumping 5 inches of rain (badly needed) in less than 24 hours and since then it has been on-and-off rain storms, mostly at night. That makes for cooler nights and brilliant light shows off the coast, some fully tricked out with long rumbling choruses of thunder. And glorious cloud formations around sunset.
Our condo, like the homes of everyone else we have talked with, had rain coming in through the roofs, windows and walls. Fortunately for us, no leaks over our beds! Mainly the water pours down one wall in the living room and my main job is to run in and remove the batik wall hanging before it gets soaked.
I had a drawer full of t-shirts that got totally drenched. That was my own fault. I inadvertently left a window open in the back bedroom. Just a crack, but that was enough. The drawer happened to be right under the window and wide open. The dryer was working overtime, needless to say.
The rain and subsequent dead-air brought out the long-dormant mosquitoes with a vengeance. They seem to eat DEET. This drought-like season has kept the island gloriously bug-free. It has also drained most of the cisterns and wells were dangerously low.
The arrival of the rains are welcome, even if they can be inconvenient.

They forced a weeklong delay of our annual Independence Day parade, and tampered down some of the other celebrations. When the parade finally happened, last Sunday, it was the highlight of the season. Freedom brought to you in glorious technicolor with a pulsing beat that commands you to dance, dance, dance for Belize!

This sudden absence of a breeze is perhaps the most impactful weather event this season  For once, 90 degrees really feels like 90 degrees. You don’t want to even move up off the couch and knowing that a roving gang of leather-jacketed mosquitoes was hanging around outside the door, ready to mug and de-blood you, increases the incentive to stay inside.
It doesn’t help that at the height of the heat and dead calm air, our power went out. Seems some renovations on a building down the line blew out power to a whole bunch of units. Naturally there were no trip boxes on the island to replace them. We had to wait until the next day for replacements from the mainland before power could be restored.
That meant no fans that night. No breeze. No oxygen. I felt like a human sponge, over-saturated and pretty rank. So, no, no sleep either. 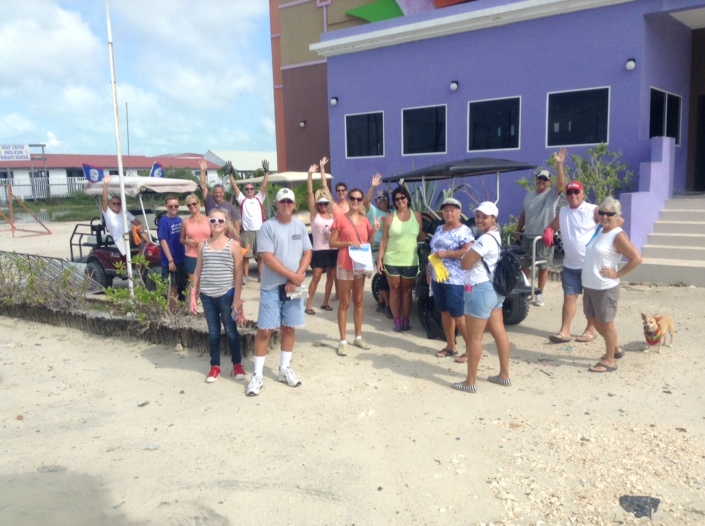 Around 2 a.m. I heard a clanking coming from the back bedroom and got up to investigate.
And there it was. My god. A breeze.
The wind had picked up from the lagoon side, ever so slightly, but just enough to bring in a cooling welcome relief. I made up the guestroom bed and dragged Rose out of the master bedroom sauna in a stupor of protest.
“You’ll thank me in the morning,” I said. “Trust me.”
And ever since, there has been this slight breeze from the west. A complete change of direction and just enough. When it blows, it refreshes. And takes the mosquitoes out to sea. It is also dragging the stinky sargassum, our bane since January,  out beyond the reef too. The air is clear and the gag reflex has subsided as we walk the shore.

Friday morning there was just enough of a westerly breeze to keep the mosquitoes at bay for an hour as more than 20 of us conducted our monthly “First Friday” roadside and beach cleanup in the Tres Cocos neighborhood. Our friend Roxie from Oceana Belize came back to help us, too.

This time out, the folks who combed the shore for trash were handed a check-off list of trash items as part of a major survey being done by environmental groups. The list would be familiar to anyone who walks the coast of Ambergris Caye — plastics, bottles, rubber goods, shoes.
Somebody suggested a checkoff item for cruise ship trash. Somebody else suggested it could read “all of the above.”
Gotta love trash humor.
It was a great turnout for the off season and the very next day, today actually, the rest of the island gets into the cleanup act as part of a Belize-wide campaign. Sometimes, picking up trash seems thankless and even hopeless. But it is so necessary. The San Pedro Sun has been carrying letters lately from visitors who were repulsed by the amount of garbage piling up on this island.
That is something worth paying attention too.
Now, with the new concrete road stretching farther and farther to the north, traffic is picking up and roadside trash is piling up. The San Pedro Town Council has promised us roadside trash barrels — and that will help once they are in place.

The other day I watched a taxi driver park, run down to the Palapa Bar for a cold beer and then just placed the Belikin bottle on the ground beside a telephone pole, before speeding away.  There were no trash cans in the area and I’m sure he couldn’t be caught with empty beer bottles in his cab — so I sort of get it.

I can see a day when trashing the island will become a cultural taboo. It is too beautiful to not take pride in the island and show her the love she deserves.  Maybe in next year’s Independence Day parade we’ll mount a “Stash that trash” float with a precision marching drill team of volunteers, each with a black plastic trash bag and a trash stick . . . .  hey, and a King and Queen of Trash! We can even clean the parade route and hand out candy to kids who bring us their trash. Hmmmmm. You in?

As always, out trash cleanup ends at Marbuck’s where Marlene and Sylvia had ice coffee and cookies waiting for us and Rose brought out chilled eucalyptus-scented towels to cool us down. A great way to wrap up a messy job!

That west wind has flattened the sea, too. Gloriously flat and clear. The water over the reef is calm, just begging for me to paddle out in a kayak and go snorkeling.
Low (or Slow) season is nearly over and a lot of our favorite restaurants are getting ready to re-open. It is exciting to bicycle around town and see the improvements being made to shops and eateries in anticipation of a new season. For example, Estel’s is installing an inside/outside bar and will offer saloon seating for single diners. Candle Garden, a busy flower and gift shop on Caribena Street has moved around the corner to Pescador Drive,  and in the expanded quarters Barbara Brown has added a little coffee shop.
The much-anticipated Nook, a cocktail bar and restaurant has opened on the beach, next door to Lily’s Treasure Chest, and after a first visit on Wednesday, Rose and I are pretty excited about that. Between 5 and 6:30 p.m. Nook offers a half-price menu on selected drinks and delicious appetizers and it is the bargain of the island. It is also a great way to sample their fare, and meet the owners/management team — Jeff, Erin and Cindy.
The change in the wind also means that many friends who escape the island during Slow/Low/Hurricane season are returning. And that is the most exciting prospect of all.
Advertisement

Great post as always, but why is the taxi driver even DRINKING while operating a taxi!? Even in Belize this is bad. As far as the parade next year, I’m in! (just remind me)

When we first moved here, drinking a beer while driving your golf cart was a common sight. I think they cracked down on drivers. Certainly drinking and driving a taxi, especially on the faster concrete road and narrow town streets is utterly stupid and dangerous. But you know how deeply ingrained drinking is in the culture here. Some people treat Belikin like water.

Love the new garbage cans. Perhaps you guys can out them up post style like they do in Orange Walk to help keep them upright. If you need a visual of that I can email you one.

That sounds very practical, Laurie. Can you send me an image to robertj.hawkins2012@gmail.com ? Many thanks!

[…] First Friday group also did their monthly clean up this week. I heard about it in more detail from Sue at the blood drive. She noted this time was their best ever. They had about 20 people show up and there was a noticeable improvement of less trash this month (except for the area by the movie theater and around the bridge) To read more about that and see pictures of who showed up click through to Robert Hawkins write up  The winds of change are in the air on Ambergris Caye. […]

An Independent Non-Discriminatory Platform With No Religious, Political, Financial, or Social Affiliations

A Public Sphere for Poetry, Politics, and Nature. Over 15,000 daily subscribers. Over 6,000 archived posts.