Still basking in the glow of a huge effort to clear the roadside of trash just north of the Sir Barry Bridge, only one week later the neighborhood tackled an especially unsightly spot.

About 20 neighbors met at Coco Loco’s Beach Bar Friday afternoon and, armed with bags and gloves, marched north on the trash.

Their objective was the area near the barge landing. Once a deep water pool, separated from the sea only by a rock wall, the area has filled in with putrid sargassum and plastic. Compounding the sea-borne trash, cyclists and walkers frequently tend to dump their drink bottles and snack bags along the trail that runs through the field.

In a little over an  hour’s time, the crew made huge inroads into the trash, accumulating an impressive pile of stuffed garbage bags.

The challenges this week included especially old and brittle plastic that has long-baked on the ground in the tropic heat; nasty little ants that tend to bite in large numbers; squishy ground where the sargassum and water mix into a treacherous mud; and of course, the acrid stench of the sargassum itself!

This trash troupe earned its happy hour beverages at Coco Loco’s after this adventure.

And it looks like this is going to be a “thing.” A week ago the roadside was spotless, nearly all the way to the Palapa Bar turn-off. Today you can see the roadside trash starting to pile up. 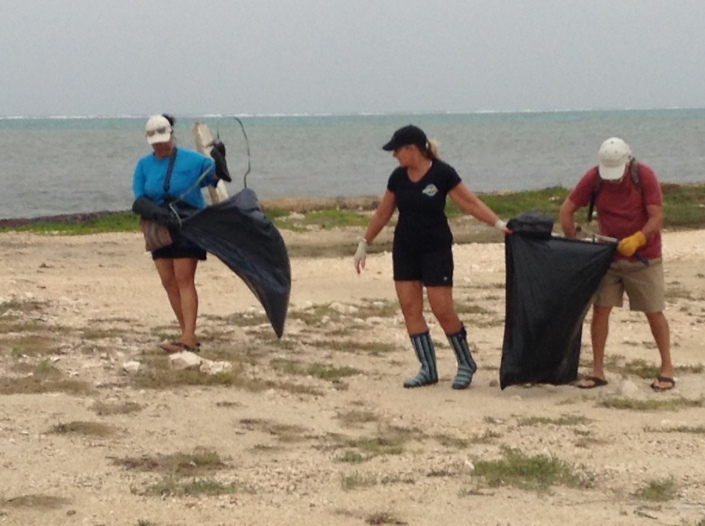 Hey, nobody expected a cultural shift over night. It will take time — and public trash barrels placed strategically along the road — for the message to get through: To love this island requires all of us to take care of her.

Nice work…especially you birthday girl! Love this new wave of clean up.

So great to see the community coming together to help clean up the island…can’t wait to get down there and help! Good job! and THANKS!!!