In the heat of the mid-day sun, the intern stood thigh-high in the murky pond,  silent and still, alertly scanning for the telltale break that would indicate his prey was surfacing.

Alert is good because, when you are hunting crocodiles, it is important that they remain the prey, not you. 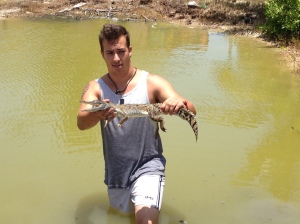 The San Pedro-based American Crocodile Education Sanctuary (ACES) — which knows  a thing or two about capturing crocs — was conducting intern-training near our home today.

Almost a year ago, ACES caught an 11-foot, 700-pound monster in the San Juan neighborhood lagoon.

And in April, ACES captured a 500-pound killer croc on the mainland.

When I arrived at the pond just north of the Sir Barry Bowen Bridge, Amaury Mellier was learning how to approach and capture a crocodile. Granted a very, very little crocodile. But think about it, what size croc would you like to start with as a learning exercise?

There actually is a six-footer in residence less than 100 yards from the training exercise. It has grown up in the neighborhood.

“He pretty much stays there and doesn’t bother anyone,” said Chris Summers, the trainer. “You’ll usually see him out there sunning himself,” he added, pointing to a sand mound near some telephone poles.

Too much commotion today, though, as the training drew curious kids and adults passing by in their golf carts.

One croc in the lagoon directly behind our house has been labeled the “dog killer” and has proven pretty elusive. I think I watched it lazily float around the lagoon one day in May.

“This is a confidence-building exercise,” explained Chris. “We brought out a larger crocodile last week but decided we needed to start with something smaller.” 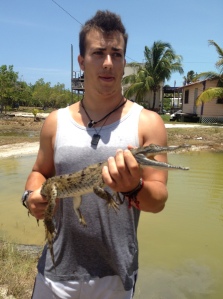 The little croc was actually captured south of town near the sewage treatment pools.

The crocodiles like it there for some reason,” says Chris. “We remove the smaller ones and clean them up then release them up north. The larger ones have just been in there too long. They are too filled with toxins and would contaminate any place we relocated them.”

This is a good time to practice with the little ones, he explained, as they are being born all over the island around this time.

This little guy will be released tonight in the lagoon behind our home.

We saw him this am and we were wondering what he was doing? Now we know. We were on an adventure and drove 7 1/2 miles north.

Sounds like fun, Karoline! Did you get as far as X’tan Ha Resort?

A Public Sphere for Poetry, Politics, and Nature: over 400,000 monthly users