About a boy and his bike

OK, not about a boy.

A manchild and his love for bikes, maybe?

Bicycles are vehicles. More often than not, a means to an end. Here in San Pedro Town, Belize, they are a significant means to get you from here to there, from home to work or school. And sometimes bicycles are the home office.

This is a bicycle used at Maria’s, a roadside fruit and produce stand on Coconut Drive on San Pedro’s southside. 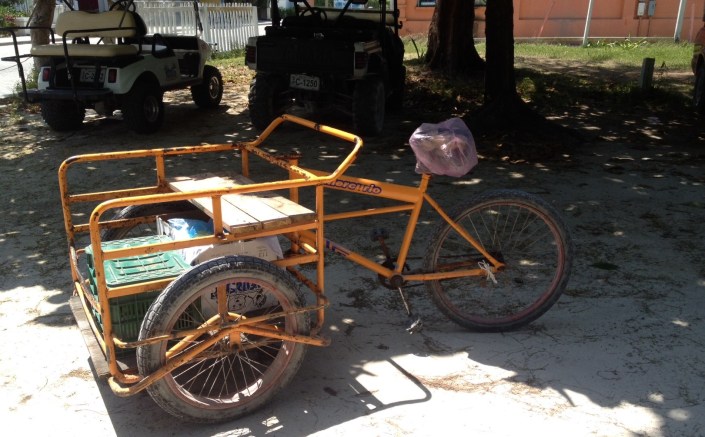 Maria’s husband, Jose, said they cost BZ$1,000 new and can easily carry 400 pounds of cargo — perhaps 600 hundred pounds with difficulty. They are sturdy bikes and were originally shipped here from Taiwan, like most of the beach cruisers we see today. Now, he said, they are made in Mexico.

I see a role for one in the future, when I am old and drooling and Rose is still yoga-strong: 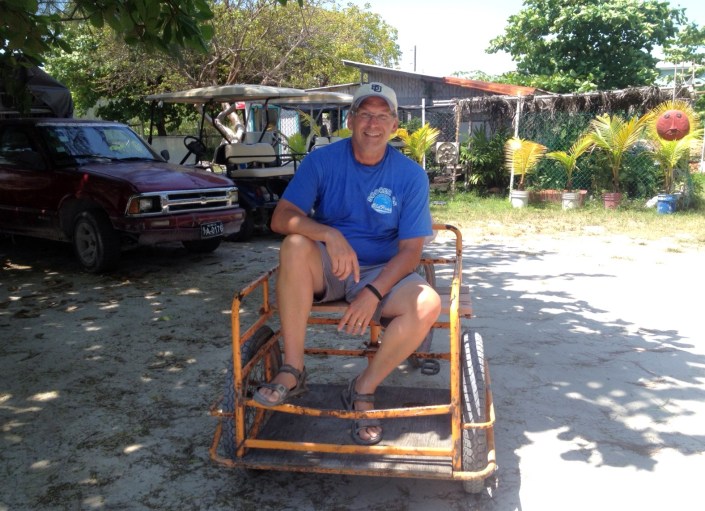 Like I said, a bike is one of the main ways people commute to and from work and school here on Ambergris Caye. These guys were taking the beach route south after a long  day’s work : 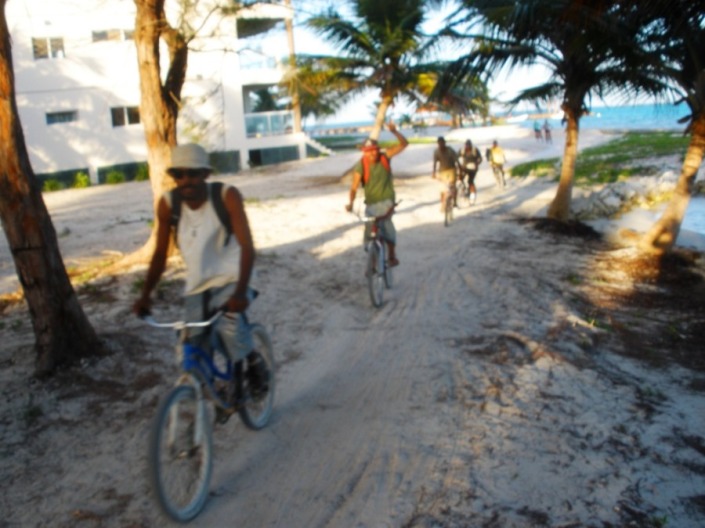 A bicycle can be the difference between making a living and not. One recent morning a young man’s tire blew, right in front of us, on his way north to his construction job. He hopped off and immediately started walking his bike.

A few minutes later a co-worker took the handlebars and pulled the bike beside him while the young man hitched a ride in a northbound golf cart. I assume they repaired the tire during a break at work.

You do what you’ve got to do.

Our friend Arquel “Fish” Johnson (below with Rose) combines his bike with a large cooler to peddle — and pedal — fresh seafood all over town. He’s been doing this for 35 years in San Pedro Town:

But bicycles are also vehicles of expression and preference. Rose and I took a three-day ride around San Francisco Bay for her birthday in 2012. We combined cycling with a couple of ferry boat rides and stayed with friends and family along the way.

Here’s Rose on our first day in Tiburon, just before we stopped for lunch:

And here she is during our third and final day, which was spent roaming the City of San Francisco. We stopped in Golden Gate Park to listen to San Francisco Opera present a sampling of music from its upcoming season: 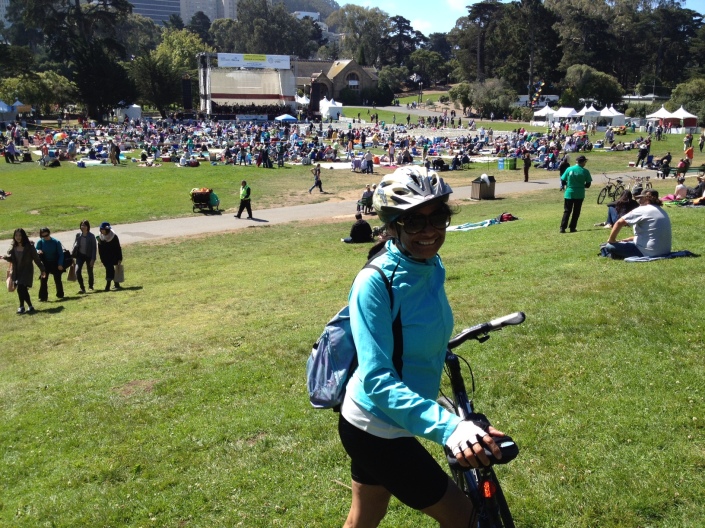 And, finally, I want to add a picture I took of  my bicycling-hero, the late-Gordy Shields of El Cajon, California,  as he was setting the 20K time trials world record for Men over 90 years old. He was 93-years old at the time.

Here’s the thing, there were no other men over 90 years old competing against Gordy. Anywhere:

Gordy’s cycling club had a slogan back then: “Keep Gordy alive until 95.” The idea was to keep Gordy cycling and healthy so he could break the 20K time trials worlds record for men over 95 years old.

So Gordy kept cycling, as many as three times a week with his pals.

There, of course, was no record for men 95 years old. It was up to Gordy to make it.

There’s hardly a day that I don’t get on my bicycle without thinking of Gordy and what a huge inspiration he was.

Rose, I don’t think you’ll be needing that cargo bike to get me around San Pedro Town. With you by my side — or most likely a half a block in front of me — I intend to keep pedaling.

One thought on “About a boy and his bike”

So love this post! I hope to keep pedaling into my 90s as well, though I might switch to a recumbent trike, since they look so darn fun — and no danger of falling.

On Ambergris Caye, we had fun riding down to Marco Gonzalez Maya site as well, and armed with plenty of bug repellent, spent a good deal of time exploring. You’re right — it’s around 5 miles south of town. Unlike north of the bridge, there are actual mile markers along the way in the south that you probably noticed.

A Public Sphere for Poetry, Politics, and Nature: over 400,000 monthly users